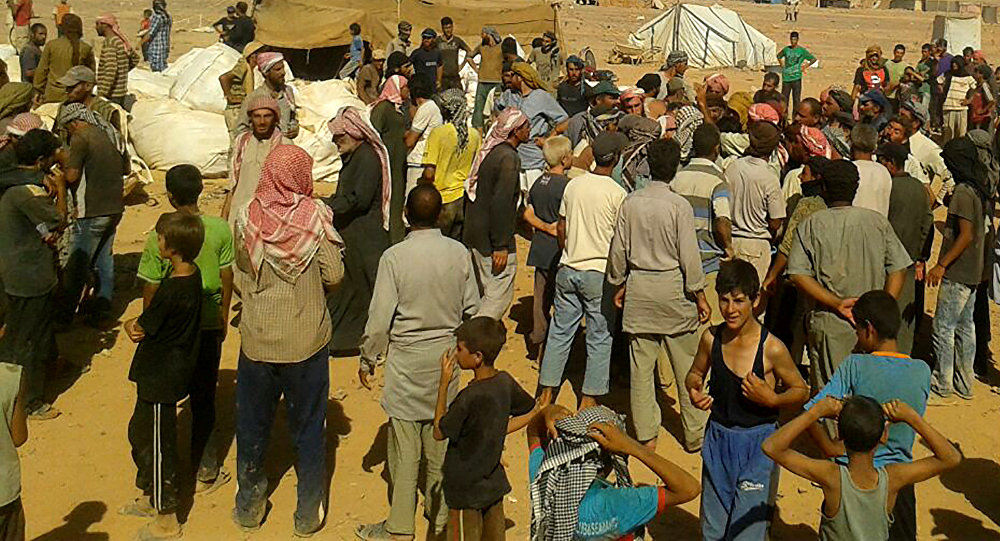 The ‘administration’ of the Rukban camp in Syria would not let UN buses inside to evacuate those in need. Instead, the militants intend to use the refugees as human shields, Maj. Gen. Alexey Bakin, head of the Russian center for Syrian reconciliation, said at a briefing Friday.

“The so-called camp administration, controlled by illegal armed units, issued a statement refusing admission to the camp for UN buses to evacuate temporarily displaced persons wishing to leave Rukban. Given [that] the camp’s population can’t leave its territory without coordination with the command of the illegal armed unit, we regard this statement as yet another evidence of the militants’ intention to keep the refugees in Rukban as a human shield,” he said.

On 12 September, a significant amount of cargo earlier delivered by the United Nations and the Syrian Arab Red Crescent to Rukban was seized by militants and moved to a base of the Kuwat Shahid Ahmad al-Abdo militant group, located to the north of the camp, Maj. Gen. Alexey Bakin said, citing refugees.

The Rukban camp houses some 25,000 people in conditions described by the World Health Organization as “deplorable” – lacking food, access to medical care and basic amenities. The camp is located in the US-controlled zone around its unauthorized military base at Al-Tanf, making it almost impossible for humanitarian workers to access the area.

The Syrian government and the Russian reconciliation center have been assisting those wishing to leave the camp.

On Friday, Russian Defence Minister Sergei Shoigu disclosed that an estimated 1,000 Syrian refugees have been returning to their homes from abroad every day as the Arab republic, with the support of Russia, seeks to restore peace after years of war.

“Today we see how every day more than 1,000 people return to their homes only from abroad. I would like to remind our colleagues, including those from Europe that when 600-700 people [asylum seekers] used to come to them daily, it was a huge tragedy for them, although, first and foremost, it is a tragedy for those people who fled their homes and countries to find at least some shelter,” Shoigu said at the award ceremony of the Russian Army 2019 festival.

According to Shoigu, the situation in Syria has normalized, thanks to Russian officers, soldiers, pilots and sailors.

“When we began working in Syria, territories not occupied by terrorists accounted for 18 percent of the entire country. Today, when we see that every day dozens of new firms open, hospitals and schools are working, when thousands of Syrian children go to these schools, we no longer remember that these very schools had been cleared by our sappers,” Shoigu noted.

In August, Russia’s Deputy Permanent Representative to the United Nations, Dmitry Polyanskiy, said that over 17,000 civilians had already left the camp with the assistance of Moscow and Damascus.

The armed conflict in Syria has been ongoing since 2011. In August 2015, Syrian President Bashar Assad asked Russia for counterterrorism assistance. Since 30 September, 2015, over 63,000 Russian troops have taken part in the anti-terror operations in Syria, with the Russian Aerospace Forces striking terrorist infrastructure.

The Syrian government has regained control over most of the territories seized by terrorists in late 2017, however anti-terror operations continue in a number of areas. The priority is now given to the political settlement and return of refugees.