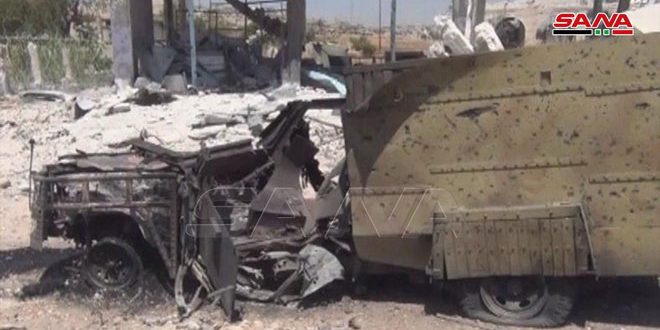 A military source told SANA that armed forces operating in Hama northern countryside and Idleb southern countryside established full control over Tal(hill) Skik, Skik and al-Habbit towns after fierce battles against the armed terrorist organizations which were positioned there.

Earlier, army units continued its operations on several direction against Jabhat al-Nusra and al-Izzah Brigades terrorist organizations, and others terrorists groups , and achieved a new progress in Idleb southern countryside over past hours after restoring control over several villages and towns in Hama northern countryside.

SANA’s reporter in Hama said that army units carried out rocket and artillery strikes on fortified points for terrorists in the surroundings of al-Habbit town in Idleb southern countryside adjacent to the administrative border of Hama northern countryside, and then they engaged in fierce clashes with the terrorist groups which include thousands of foreign mercenaries.

The clashes ended up with eliminating the last terrorists’ remnants in the town after inflicting heavy losses upon them , while the remaining fled towards their positions deep in the de-escalation area , especially towards khan Sheikhoun city.

A field commander told SANA reporter that during the recent operations, the army units adopted a progress technique from several directions simultaneously with the element of surprise before clashing with the terrorist groups that were collapsing within hours in front of the concentrated army strike and fleeing towards the north in areas where they are positioned, leaving behind them their destroyed vehicles and large amounts of munition, in addition to complex network of tunnels dug by the terrorists with modern drilling tools and machinery, some of which are US-made.

Significant losses suffered by terrorists in the village of Skik and Tel Skik in the southern countryside of Idlib, liberated by the army