Video: Roundtable Discussion on the Middle East Issues: Activities of the White Helmets Organization in Syria 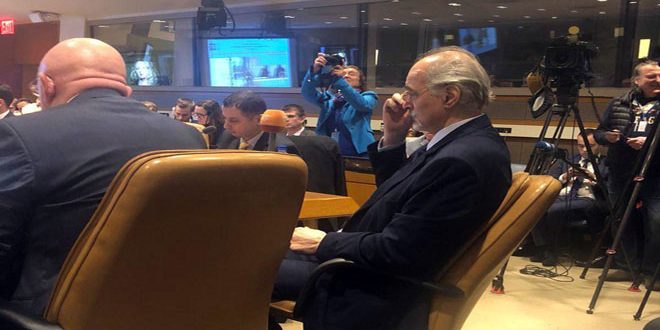 Permanent Mission of the Russian Federation to the United Nations and the Permanent Mission of the Syrian Arab Republic to the United Nations organized on Thursday an unofficial seminar in the UN under the title of “The White Helmets Activities in Syria”, with participation of Syria’s permanent representative to the UN, Dr. Bashar al-Jaafari and Russia’s Permanent Representative to the UN, Vasily Nebenzia.

Al-Jaafari said that Syria sent a total of 750 letters to the UN Secretary General , Head of the UN Security Council, the Security Council subcommittees on counter-terrorism and other international bodies since 2011, all of which are related with the activities and crimes of terrorist groups.

Al-Jaafari pointed out to the negative role of the Western media outlets in misleading the Western public opinion by presenting the White Helmets as a humanitarian organization which carries out civil defense work, while the truth is it represents the media arm for Jabhat al-Nusra terrorist organization.

In response to questions from the audience, al-Jaafari stressed that the so-called foreign fighters are terrorists in nature, indicating that the states which support terrorism in the UN Security Council were completely denying the presence of these terrorists in Syria until some of them returned to their countries of origin, including Britain, Belgium and the United States and committed acts of terrorism, which led these countries to recognize what we have been repeating about the nature of the terrorists.

Al-Jaafari said that those countries sponsoring terrorism were trying to get rid of the terrorists by sending them to Syria in order to die without putting on their agendas the turning back of the terrorists to their own countries.

Statement by H.E. Mr. Vassily A. Nebenzia, Permanent Representative of the Russian Federation to the UN on “Activities of the White Helmets in Syria”.

White Helmets are being portrayed in the Western media as humanitarian heroes, and all attempts to expose who they really are, are being presented as a campaign on disinformation.

Only yesterday there was an article on White Helmets in the Washington Post which starts with “A Russian disinformation campaign has pushed Syria’s best known civilian rescue group, etc. In response, Russia is using state-run bodies and media outlets to mount a brutal and unrelenting information campaign against the organization, including bogus charges that the Wight Helmets are preparing chemical attacks on Syrian soil”. The British-based “Bellingcat” research group said Tuesday – we know what kind of research British group “Bellingcat” conducts – the White Helmets are being presented as humanitarian heroes and martyrs chased and persecuted by the Syrian government.

Permanent Mission
of the Russian Federation to the United Nations