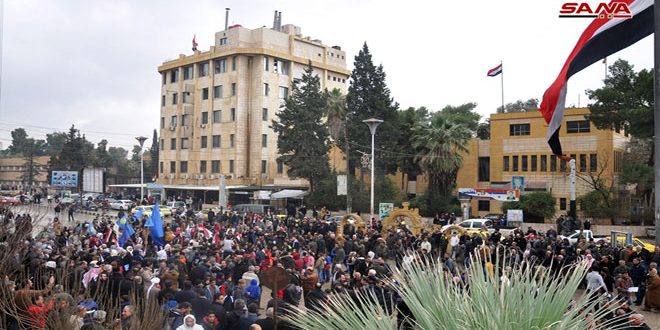 Civil, religious, and social activities in Hasaka city and in Qamishili city organized protests against the threats launched by the Turkish regime and its aggressive statements regarding the unity and territorial integrity of Syria and its people.

The protests were staged on Thursday in front of the Justice Palace in Hasaka city and the Cultural Center in Qamishili city.

The participants raised the Syrian flag and banners which condemned the aggressive threats of the Turkish regime, stressing on the unity of the Syrian soil and their solidarity with the Syrian Arab Army which is confronting terrorism and its supporters. 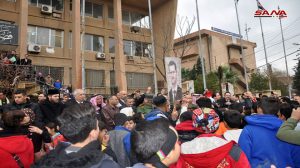 The Patron of the Virgin Mary Church in al-Nasera neighborhood in Hasaka, Father Elias Qiss Elias, said that those threats are part of the aggressive scheme against the Syrian people, emphasizing that all these attempts will fail as the others schemes failed before, thanks to the steadfastness of the Syria’s people, army, and leadership.

Imam of al-Salihiya neighborhood’s mosque, sheikh Tareq Atiya, said that the Syrian people are capable of confronting any aggression which targets the Syrian territory, expressing the confidence of Hasaka’s locals over the Syrian Arab Army’s ability to repel any threats targeting the country’s security and stability.

The participants also expressed rejection of the illegal presence of the Turkish troops on Syrian soil.

Meanwhile, citizens of al-Bou-Kamal city in Deir Ezzor south-eastern countryside staged a sit-in, in protest against the Turkish regime’s threats to launch an aggression on the Syrian territories and its direct support to the terrorist groups.