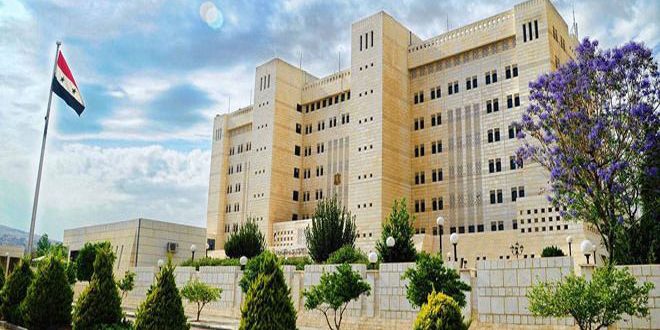 Foreign and Expatriates Ministry on Tuesday sent two identical letters to the UN Secretary General and UNSC President on the crime committed by the illegitimate US-led “International Coalition” assault, killing or injuring more than 60 civilians in al-Shafa village in Deir Ezzor Province.

In the statement, the Ministry said that the crime committed against the civilians in al-Shaffa village refers to the total collapse of the value system and the moral principles that the nations have agreed to respect since the establishment of the United Nations as a result of total disregard of the United States and its allied powers. It also confirms all over again the underestimation of countries of this notorious “Coalition” in the lives of innocent civilians and the provisions of International Law and the law.

The Foreign Ministry added that Syria urges the UNSC to assume its responsibilities in taking a serious and prompt move to stop these assaults and massacres, as it also reaffirms the need for the Council to adopt whatever is required for establishing an international neutral independent mechanism for investigating into these crimes and punishing their perpetrators.

The statement continued to say that assaults of the criminal Coalition and its continuous bloody aggressions against the innocent civilians have become deliberate and constant where various kinds of internationally banned and indiscriminate weapons of mass destruction such as white phosphorus bombs are being used.

These assaults are aimed at killing as many victims as they can and prolonging the crisis in Syria, as well as destroying much more infrastructure and undermining sovereignty and territorial integrity of Syria in a way that totally contradict all the resolutions adopted by the UNSC regarding the crisis.
The Ministry concluded by saying that the Syrian Arab Republic stresses that the continuous silence of the UNSC on the crimes and their perpetrators will encourage the aggressive states to continue to kill the Syrian civilians and destroy their properties as it will put the UNSC and the UN General Assembly in a state of complete disability to meet their responsibilities shouldered on them by the UN Charter and their main organs.