MOSCOW, October 22. /TASS/. The United States is not ready yet for full-fledged cooperation on Syria with Russia to eliminate the remaining terrorists and ensure refugees’ return, Russian Foreign Minister Sergey Lavrov said on Monday.

“Concerning our cooperation with the US on other issues, particularly, regional affairs – Syria, the Korean Peninsula and the situation around the Iran nuclear program – no formalized negotiations have been going on,” he said when asked whether the issue would be raised at the talks with US National Security Adviser John Bolton.

“We have a deconfliction channel on Syria. We would be prepared for more substantive cooperation to find ways of resolving the Syrian conflict as efficiently as possible, primarily, to launch the process of refugees’ return, begin political negotiations and ensure the final elimination of remaining terrorists on Syrian soil,” he said.

“However, the US is not ready for such full-fledged cooperation yet,” Lavrov stressed.

Regarding the dialogue on the Korean Peninsula, Lavrov recalled that Moscow had recently hosted “very useful consultations between US Department of State representative [Stephen Biegun] and Russian Deputy Foreign Minister [Igor Morgulov].

Commenting on events involving Iran’s nuclear program, Russia’s top diplomat emphasized that Russia had long finalized its stance on that matter. “The US officially decided to quit it [the deal on Iran],” he went on to say. “We believe it is big mistake, and this view is shared by other parties to the deal, namely, the European Union and China. Intense negotiations are currently in progress between those who remain in that agreement in order to prevent a profound negative impact of the American decisions for economic ties between Iran and all other countries.”

On Monday, Bolton began his two-day visit to the Russian capital. Trump’s adviser earlier tweeted that on October 20 he would be travelling to Russia, Azerbaijan, Armenia and Georgia to meet with his counterparts in order “to advance American interests on a range of security issues.” 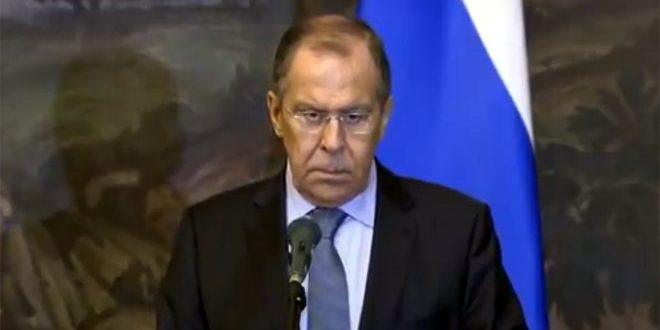 Russian Foreign Minister Sergey Lavrov affirmed that the process of eliminating the remaining terrorist organizations in Syria is continuous in parallel with the ongoing efforts to find a political solution to the crisis and the return of the displaced to their areas.

Lavrov’s remarks came during a joint press conference with his Madagascar’s counterpart Eloi Maxime Dovo in Moscow on Monday.

The Russian top diplomat pointed out that Russia is ready to coordinate with all countries with a view to a achieving a political settlement of the crisis in Syria. However, Washington does not show the readiness required for comprehensive cooperation with Moscow on this issue, despite the Russian willingness to strengthen this cooperation.