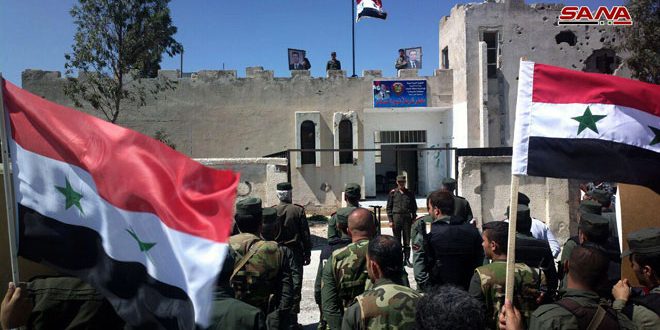 Amid popular participation, the national flag was hoisted over Nabaa al-Sakhar town in Quneitra countryside.

SANA’s reporter in Quneitra said Internal Security Forces entered the town of Nabaa al-Sakhar to the southeast of Quneitra to enhance security and stability and to pave the way for the return of state institutions to it as inhabitants gathered to participate in raising the national flag over the town’s police station.

On Saturday, Nabaa al-Sakhar town was liberated along with 20 other towns, villages and farms in the area between Daraa and Quneitra countryside. 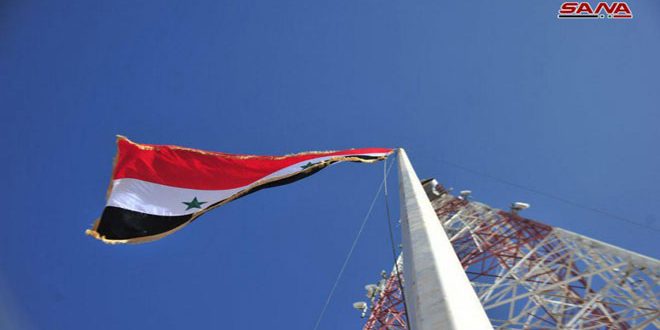 A settlement agreement was reached in Nawa town in the northwestern countryside of Daraa.

The agreement stipulates for settling the legal status of all members of armed groups positioned in Nawa town in Daraa countryside.

This agreement comes less than 24 hours after the exit of 250 terrorists who refused to join the settlement with their families on 20 buses to northern Syria.

SANA’s reporter said that settling the legal status of militants will start later and they will join the allied forces of the Syrian Arab Army to combat the terrorists of Daesh and Jabhat al-Nusra in Daraa countryside.

As for this agreement, Nawa adds to a number of villages and towns which joined reconciliation and settlement in the countryside of Daraa and Quneitra. 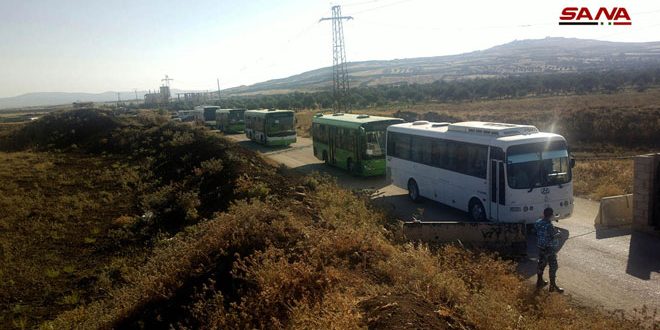 Preparations continued on Sunday evening for transporting the third batch of terrorists who reject settlement along with their families from Quneitra countryside to the north of Syria as per the agreement reached to clear the province of terrorism.

SANA’s war correspondent, reporting from Juba village crossing point, said that 20 buses carrying hundreds of terrorists and their family members have left Um Batina village and gathered at the outskirts of the village.

The correspondent said that the buses are searched carefully to ensure that terrorists don’t take anyone against their will with them.

Buses will continue to be prepared until the third batch is ready to be transported to the north of Syria, he added. 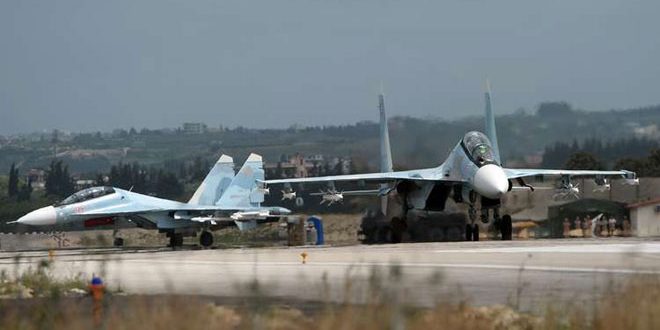 The Russian Hmeimim airbase said that it downed an unmanned aerial vehicle (UAV) that was launched towards the airbase in Lattakia province.

The base’s spokesman told reporters that on Sunday morning, July 22 2018, the air defense destroyed at a long range another unknown UAV that was approaching the Hmeimim airbase from the northwest.

There were no casualties or material damage and the Russian air base is operating as normal, the spokesman added.