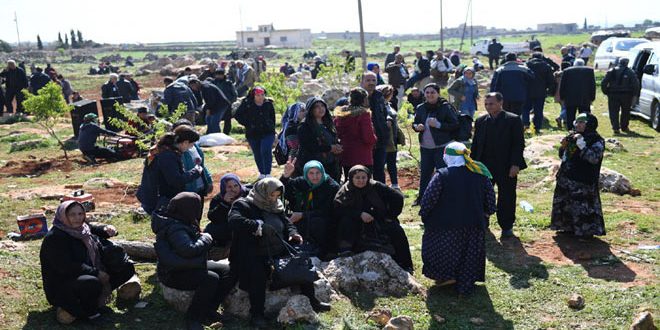 The United Nations confirmed that about 170 thousand people were displaced from the Afrin region in the northern countryside of Aleppo because of Turkish aggression on the region, referring to the terrible conditions faced by the population.

Turkish forces and their st terrorist mercenaries swept through the city of Afrin, killing and injuring civilians, vandalizing,looting homes, public buildings, and destroyed dozens of villages and towns. Turkish forces committed many massacres against civilians, in addition to the destruction of vital infrastructure including pumping stations, electricity and communication towers, hospitals and health centers.

“It is currently estimated that 167,000 people have been displaced by the hostilities in the Afrin area,” the spokesman for the UN Office for the Coordination of Humanitarian Affairs, Janez Larki, told AFP. “The population has fled to the nearby town of Tal Refaat.

Larki estimated that there are still fifty to seventy thousand civilians trapped inside the city facing a health and humanitarian crisis according to the World Health Organization, pointing out that only one of four hospitals is currently functioning.

“Children, women, and men have undertaken harrowing journeys to flee Afrin and need urgent health assistance. Our staff has met civilians who reported walking for 36 hours to reach safer areas,” the WHO’s representative in Syria Elizabeth Hoff said in a statement, referring to the acts of abuse by the forces of the Turkish regime and their mercenaries of terrorists.

Marixie Mercado, a spokeswoman for the United Nations Children’s Fund (UNICEF), also said displaced people arriving at collective shelters in Nubul had described “running in the face of shelling, sleeping in the open, being separated from their families.”