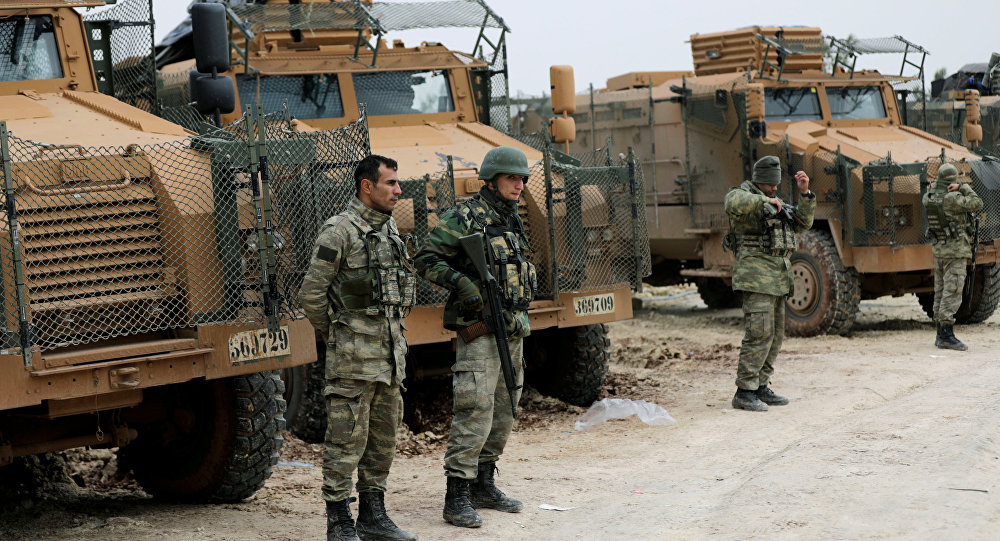 Turkish army officially declared on January 20 the launch of an offensive targeting the positions of the Democratic Union Party (PYD) and People’s Protection Units (YPG) in Afrin region in northwest Syria. The Turkish AKP government’s excuse was the threat against national interests and border security.

The operation has been conducted jointly with the Free Syrian Army (FSA) terrorist group.

It has been 20 days since Erdoğan started the Afrin Operation. The number of soldiers died in 20 days is 17. It is not known how many died from the subcontracted forces called FSA.

When you read the statements made by TSK [Turkish Armed Forces], you conclude that the operation has been moving very slowly. There is no statement on when and how to enter Afrin.

Besides that, there are some news that Turkey lost men in the south, in rural Idlib that has no direct relation with the area of operation. It is claimed that al-Nusra besieging al-Fu’ah and Kafriya retreated into the area that is under Turkey’s control as the Syrian army moves forward.

So there is a military operation that is moving quite slowly for this reason or another, that results in a substantial number of deaths although it has not yet moved to the city centre, and that is unknown when and how it is going to end.

It can be said that this kind of uncertainty is normal for any military operation. However, it is clear for this operation that the performance and uncertainty are the results of the ambiguous political objectives linked to the operation.

What is Erdoğan’s objective in Afrin Operation?

According to the official statements, it is to clear the YPG forces from the borders. Even before the operation began, however, everyone who can see what was going on said that this objective, independent from how legitimate it is, cannot be realised by targeting Afrin but by targeting the east of the Euphrates, where the US forces were located. Yet the operation targeted Afrin. Furthermore, they attempted to move towards targets like rural areas of Idlib, which seems irrelevant at first sight.

The official statements now say that Turkish forces will move to Membij, to the east of Euphrates, from Afrin. Nothing, however, is explained on why they had to start from Afrin if the main target was Membij and beyond.

What is the strategic importance of Afrin? It is not known.

This uncertainty is actually a result of the big difference between the real political aim of the operation and the official statements. Afrin is a war of Erdoğan for show only. Erdoğan’s aim is not only to benefit from the advantages created in domestic politics but also to force the cooperative relationships in Syria to be redesigned.

Afrin is the bargaining table of Erdoğan. The facts that it is full of uncertainties and it has been extended over a period are direct results of this bargaining aspect of his political objectives.

Then who is he bargaining with? The US.

Erdoğan is revealing several cards on the table with this expedition. First, he tries to show that he is able to control the subcontracted forces, which were internalized by the TSK, and what these forces can do. Second, he tries to take the control of northern Syria by blocking the Syrian army from moving forward in Idlib. Third, despite his collaboration with Russia, he makes the offer of “safe zone” all through northern Syria to the US by using his minister of foreign affairs. In other words, dissolving the Russian table is one of Erdoğan’s bargaining cards.

The current strategy of the US in Syria is to divide the country, to create Kurdish protectorate in the north and to leave most of the resources of the country under the control of this protectorate.

Erdoğan’s bargaining table does not exactly match with this strategy. Furthermore, it is actually possible for Erdoğan’s cards to backlash. For example, his claim that he can control the subcontracted forces has failed in the Idlib case.

However, there is no mismatch about dividing Syria. Erdoğan objects to the issue of how Syria will be divided rather than its division. He offers an alternative to the US. He aims to create an area to locate the subcontracted forces in the north under Turkey’s control. This is actually very similar to the alternative named after Davutoğlu. Erdoğan wants to start everything from the beginning within the new situation.

Today, it is not possible to know whether or not this bargain will end as Erdoğan wishes.

However, it is clear that Erdoğan’s expedition aims to do a bargain with the US and its political objectives are not clear.

This means a military game will be played in Afrin for some time. Therefore, some more “strategic” hills will be captured for a while.