The Turkish intervention into Kurdish Syrian Democratic Forces-controlled areas in Afrin, northwest Syria has intensified, entering its fifth day on Wednesday. Sputnik offers a summary of the day’s most important military reports and political and diplomatic announcements.

Turkey’s General Staff announced Wednesday that the Turkish Air Force conducted air strikes involving 27 aircraft against 47 Kurdish and Daesh targets on Wednesday. The military estimates that a total of 287 terrorists were killed in the first four days of Operation Olive Branch, the Turkish incursion into northwestern Syria which began after the US announced plans to create a Kurdish-militia operated border security force in the region.

Also on Wednesday, Afrin region’s health department told Kurdish news agency Hawar that civilian casualties amid the operation had climbed to 35 amid Turkish shelling of populated areas, with more than 100 others sent to hospital. On the Turkish side, the governor of Kilis, a city near Turkey’s border with Syria, said that one civilian had died in hospital after a missile attack fired from Afrin hit a local mosque. At least five others were wounded in that attack. The figures follow up on earlier reports of 15 civilians injured in Kurdish shelling of Turkish territory in border areas.

Television channel Al-Mayadin reported Wednesday that a column of Turkish tanks had entered an area in southern Aleppo province in an effort to crush Kurdish fighters in Afrin. The Firat news agency also reported that Kurdish militants in Afrin had repelled attacks by FSA militia, destroying three tanks and forcing the rest to retreat.

Clashes have been reported to be ongoing throughout the day.

Speaking to Sputnik, Turkish Deputy Prime Minister Mehmet Simsek emphasized Wednesday that Operation Olive Branch is “about border security, about national security,” and that Turkey has “no quarrel with our Kurdish brothers.” Reiterating the Turkish position that the Kurdish YPG militia are affiliated with the PKK, a Turkish Kurdish organization Ankara considers a terror group, Simsek pointed out that Turkey has recently faced some 700 incursions and attacks along the border with Afrin.

The politician added that Ankara wants to see a united, “strong, stable and prosperous Syria,” and does not have any interest in even “a single inch of the Syrian territory.”

Turkish President Recep Tayyip Erdogan confirmed Wednesday that Ankara would not limit its military campaign to Afrin, and that the operation would be continued in Manbij, about 100 km to the east. “By launching Operation Olive Branch, we have stopped the games of different powers who seek to implement their plans in our region. We will completely clear the region of terrorists, beginning with [the Syrian city of] Manbij and throughout our entire border [with Syria], thereby ensuring our security,” Erdogan said, speaking to local government officials in Ankara.

Also on Wednesday, Foreign Minister Mevlut Cavusoglu said that US Secretary of State Rex Tillerson had proposed the creation of a 30-km security area in northern Syria to avoid clashes between the Turkish and US militaries in a telephone conversation. Cavusoglu told Turkish media that he had urged the US to end its support for the YPG, and said that the US “does not want to face Turkey in the north of Syria.”

In the meantime, a Pentagon spokesperson told Turkish media that the US would cut training, advice and assistance to any Kurdish forces “not specifically focused” on combating Daesh, including those considering heading to assist Kurdish militia in Afrin in their fight against Turkey.

Finally, Turkey’s Anadolu news agency reported Wednesday that police had detained close to 150 people for social media posts in support of the Kurdish militia groups in Syria and Turkey. A law enforcement source speaking to the news agency confirmed that Turkish social media accounts are being monitored by police, and that all users spreading the propaganda of groups that Ankara characterizes as terrorists will be held accountable.

The Turkish military launched Operation Olive Branch on January 20, following repeated warnings by Ankara that it would intervene in Kurdish-controlled areas in northern Syria after the US announcement that it would begin the training of a border protection force consisting of Syrian Kurdish militia units.

Damascus has condemned the operation as an assault on Syria’s sovereignty. Moscow, meanwhile, has urged all parties to exercise restraint, and called for the parties to respect Syria’s territorial integrity.

Civilian Casualties in Both Syria, Turkey Amid Fifth Day of Afrin Op 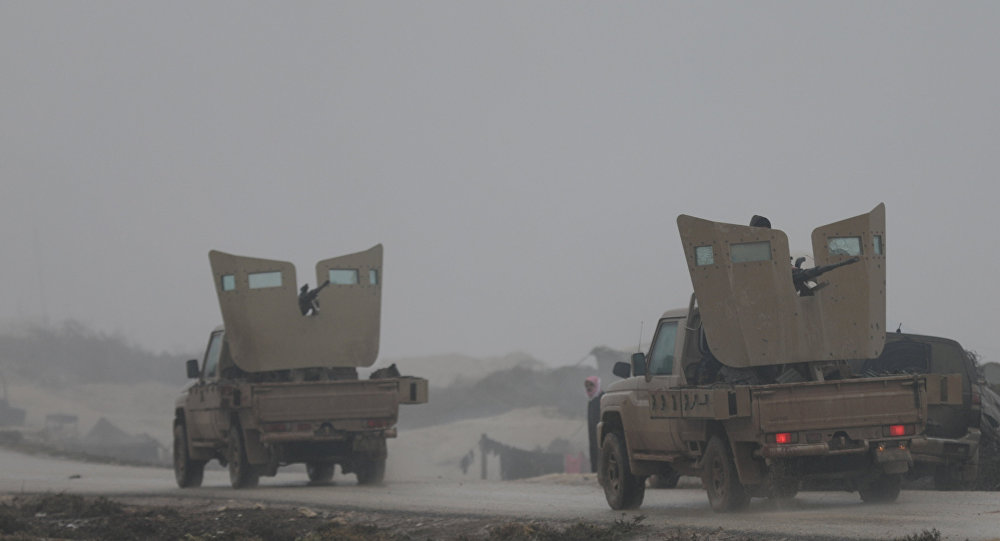 As the fifth day of Ankara’s operation in the Kurdish enclave of Afrin is drawing to a close, fighting has already claimed dozens of civilian lives in Syria and left two people dead and many others injured on the Turkish territory.

Casualties on the Syrian Side

Civilian death toll in Syria’s Afrin has climbed to 35 as Turkey’s shell fire is mostly targeting settlements despite of the presence of people there, Afrin’s health department official Angela Rasho said as quoted by Kurdish agency Hawar.

Over 100 people are currently receiving medical attention in Afrin’s hospitals, she added.

Turkish presidential representative Ibrahim Kalin stated on Tuesday that Ankara’s operation is directed only against terrorists, whereas securing civilian lives is the main priority of Turkey. Kalin also warned against false rumors and propaganda being spread about the operation. 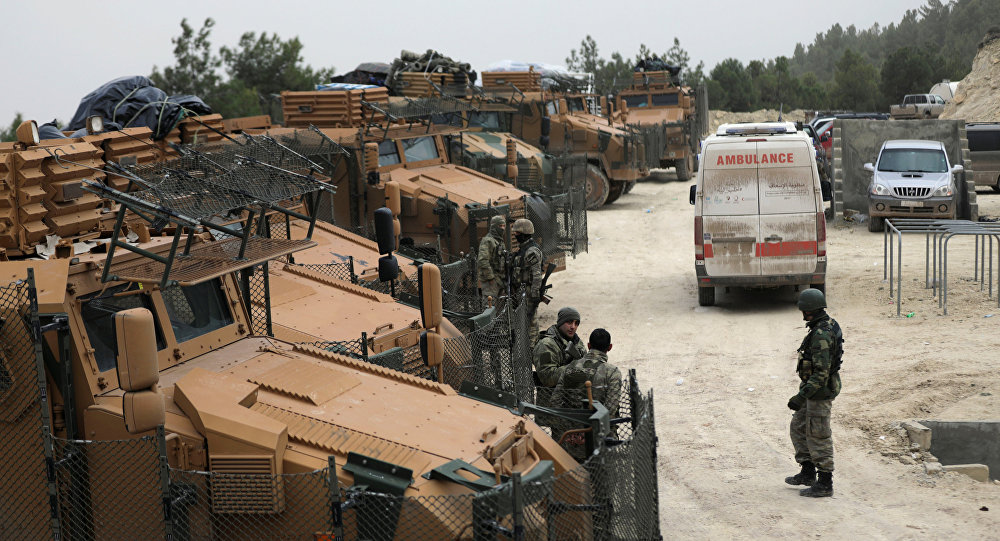 Two civilians died in a hospital from the injuries after a missile fired from Afrin hit the mosque in the center of Turkey’s Kilis located on the border with Syria, the DHA agency reported.

At least 8 people were wounded as a result of the missile attack on the mosque, whereas another rocket stroke a residential building injuring 5 people, according to the Afrin’s governor.

Earlier, the Turkish media reported 15 civilians injured as a result of the shelling.

📹 3 rockets from #Afrin have hit Teacher’s lodge and a mosque area in #Kilis. Many casualties.pic.twitter.com/pVpEau1tch

How Many People Died Since the Start of Operation?

There are conflicting reports on the civilian casualties as neither of sides has released information about fatalities, thus it is difficult to gauge the exact death toll.

The UN Secretary-General spokesperson Stephane Dujarric on Tuesday expressed deep concern over Turkey’s ongoing operation, saying the offensive has already forced about 6,000 of people leave their homes and claimed lives of civilians, though he did not clarify how many people died. Turkish airstrikes have left at least 24 civilians dead, however, Turkey asserts it targets only combatants.

Turkey began a military intervention in the Afrin region, dubbed Olive Branch Operation, on Saturday by shelling Kurdish positions surrounding the Syrian city, with the ground offensive starting the next day. According to Turkish Deputy Prime Minister Bekir Bozdag, the only aim of Ankara in Afrin is to eliminate terrorists from the area.

Tensions around Afrin has been running high since the US announcement of its plans to build a 30,000-strong Kurdish force from Syrian Democratic Forces (SDF) fighting Daesh in the region. Ankara’s concerns are caused by the fact that the SDF is affiliated with Syria’s Kurdish People’s Protection Units (YPG), which Turkey considers to be a terrorist organization as they have ties to the Kurdistan Workers’ Party (PKK) which is actively fighting against the government in Turkey in a bid to gain independence.

Since the start of Turkey’s offensive the world community has been closely monitoring the humanitarian situation in the region. Russia stated that it follows the humanitarian aspects connected with the offensive stressing that it stays in contact with both Damascus and Ankara on this issue. The EU foreign affairs chief Mogherini also noted the importance of ensuring the security of civilians and their access to the humanitarian assistance amid the operation.