The Palestinian ambassador to Moscow and the secretary of the Fatah movement’s central committee have spoken to Sputnik about the prospects of settling the Israeli-Palestinian conflict in light of the recent agreement reached between two rivaling Palestinian movements.

MOSCOW (Sputnik) — Russia could play an active role in securing a dialogue between Israel and Palestine, the secretary of the Fatah movement’s central committee told Sputnik on Monday, adding that Moscow’s involvement in the political process was an important condition for stability in the region.

“We need the Russian participation [in the political dialogue]. Russia has good relations with Israel, that’s why I think it has capabilities to play an active role [in talks] between Palestinians and Israelis,” Jibril Rajoub said during his visit to Moscow.

The Palestinian official added that Moscow’s participation was vital to maintaining stability in the Middle East.

Tensions between Israel and Palestine have been escalating through the years. The Palestinians are seeking to create their own state on the territories of the West Bank, partially controlled by Israel and the Gaza Strip. Israel, in turn, refuses to recognize Palestine as an independent political and diplomatic entity. The direct talks between the two countries collapsed in 2014, when the latest armed conflict between Israel and Hamas took place.

On the US and Israeli Decisions to Leave UNESCO

Palestine believes that the United States’ decision to withdraw from UNESCO and Israel’s intention to follow suit are a mistake, Jibril Rajoub said.

He noted that the United States and Israel would only lose from making such decisions.

“I am sure that UNESCO will continue its work in the interests of the international community. And Palestine will continue to participate in the organization’s work,” Rajoub said.

On the Recent Deal Between Hamas and Fatah 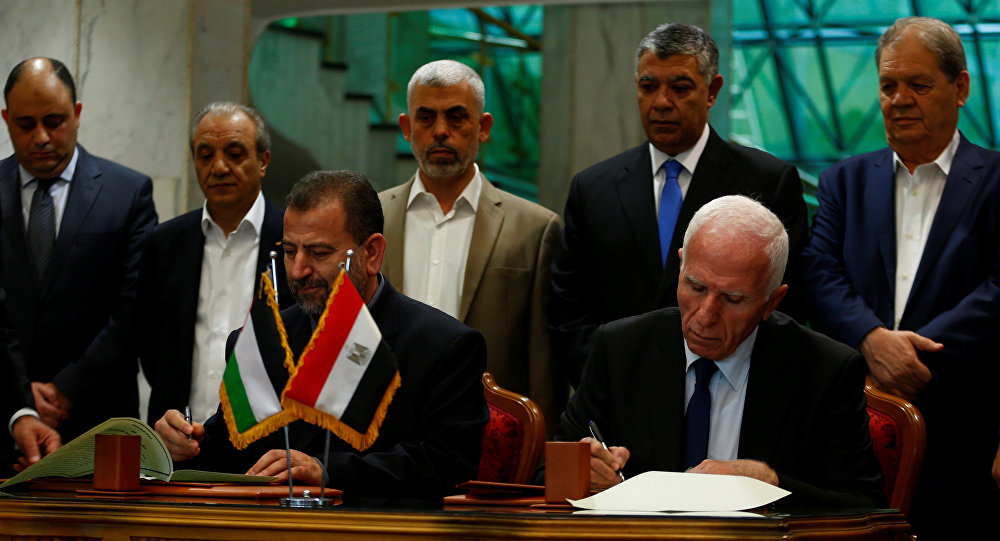 The Palestinian ambassador in Moscow, Abdel Hafiz Nofal, in his turn, told Sputnik that the Palestinian authorities believed that the recently reached agreement between Hamas and Fatah would “send a strong message to everyone – including Israel and the United States – that we are not going to abandon the peace process.”

When speaking about the Israeli position in the negotiation process, Nofal stressed that Israel was trying to deny any responsibility for settlement.

“We held negotiations. … But the Israeli side has given no response. This means that Israel was trying to absolve itself of any responsibility for the peace process, settlement and the two-state solution. We would like this to take place soon, but we can hardly believe [that this will happen],” the ambassador said.

On October 12, Hamas and Fatah, two rival Palestinian movements controlling the Gaza Strip and the West Bank, respectively, reached new agreements during their reconciliation talks mediated by Cairo. This included an arrangement stipulating that the national unity government should start its work no later than December 1.

Earlier in October, Israeli Prime Minister Benjamin Netanyahu said that Israel would not accept any reconciliation deal between Hamas and Fatah without the dismantlement of the Hamas military wing and the severance of its connections with Iran.