Hopeful onlookers should recall how Bin Laden’s death was followed by the expansion of terrorism, not its defeat.

Reports have once again emerged that the supposed leader of the self-proclaimed “Islamic State” (ISIS), Abu Bakr al-Baghdadi, was killed – possibly in a recent Russian airstrike in Syria.

News confirming the death of Baghdadi, would appear to have significant implications regarding the terrorist organization and its now global-spanning operations stretching from North Africa, across the Middle East and Central Asia, and even reaching into Southeast Asia as ISIS-linked militants continue to occupy a city in the south of the Philippines.

However, beyond the possibility of undermining the US rationale for maintaining a significant and growing military presence across regions of the planet inflicted with ISIS operations, Baghdadi’s death would have little to no impact at all on these actual operations.

ISIS is a State-Sponsored Militant Proxy – Not an Independent Organization

ISIS is first and foremost a proxy military organization, created by and for the state sponsors that fuel it politically, financially, and militarily. As revealed in a 2012 US Defense Intelligence Agency (DIA) document (PDF), these include the United States itself, its European partners, NATO-member Turkey, Saudi Arabia, Qatar, and Jordan, as well as Israel.

The summation of ISIS’ fighting capacity stems from a torrent of cash, weapons, supplies, and military protection provided to the group, particularly in the establishment of safe havens within Turkey, Jordan, and the Israeli-occupied Golan Heights where Syria and its allies are unable to strike. 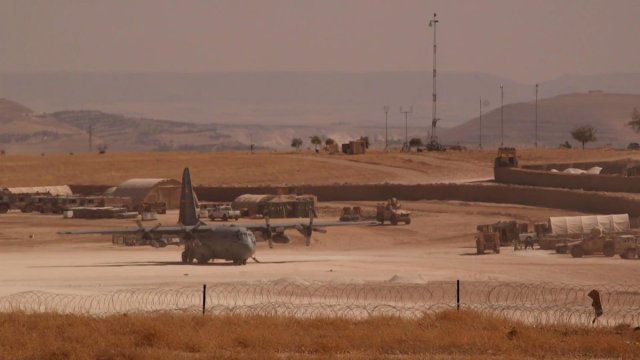 Image: US presence in Syria is large and growing. It will only “pull the plug” on ISIS if it plans on replacing it with something more permanent. ISIS itself has many other “safe houses” worldwide to preserve itself in, courtesy of US foreign policy.

Within Syria itself, virtual safe havens have been likewise established by US and Turkish occupations, preventing Syria and its allies – including Russia and Iran – from fully rooting the organization from within Syria’s borders. On numerous occasions, Syrian forces have even come under direct US military attack while engaging ISIS militants.

Furthermore, as the US footprint in Syria expands, its need for ISIS as a pretext to build the necessary infrastructure to encircle and pressure Damascus with wanes. Replacing ISIS with something more permanent – such as US occupied “safe zones” Syrian forces and its allies cannot attack – appears to already be underway. “Pulling the plug” on ISIS in Syria would be of paramount political convenience, allowing ISIS fighters to redeploy to other “safe houses” US foreign policy has afforded them – particularly Libya and Afghanistan.

The death of a single figurehead – under these geopolitical conditions – would have virtually no impact on the organization. Only identifying, exposing, and disrupting the state-sponsorship of ISIS would impact its activities on the ground in any of the now numerous countries it is operating.

In many ways, the death of Al Qaeda’s supposed leader – Osama Bin Laden – was nothing more than America’s way of closing the book of “Al Qaeda the villain” and opening another where the villainous nature of Al Qaeda could be portrayed as somewhat more ambiguous – with its activities, agenda, and motives running parallel to that of Washington and its allies – and at times – cooperating with the West.

There is also Al Qaeda’s lingering presence even in Afghanistan itself where the US is preparing to enter its seventeenth year of occupation allegedly aimed at preventing the Central Asian state from once again becoming a safe haven for terrorism – despite clearly being one at the moment.

The elimination of these figureheads – whether it is Baghdadi or his predecessor Bin Laden – serves only to manipulate the narratives behind which geopolitical agendas unfold. The agendas themselves, along with the wealth and power driving them, require a much more robust and practical approach to challenge, obstruct, or defeat altogether.

The process of identifying the sources of wealth and power, as well as practical alternatives that can challenge and eventually replace them upon the geopolitical gameboard are the only means of truly defeating the sort of proxy terrorism Al Qaeda and ISIS represent. Before this takes place, more immediate, but costly and uncertain military operations like those currently underway by various nations around the globe including in Syria seek to isolate and eliminate proxy terrorism within their specific borders.

Such military campaigns are not only costly, but ultimately unsustainable if the root cause of proxy terrorism and the state sponsors perpetuating and exploiting it are not ultimately dealt with. As long as the true source of ISIS’ power remains intact in Washington, London, Brussels, Ankara, Riyadh, and Doha, ISIS itself will effortlessly survive Baghdadi’s otherwise insignificant passing.