Moscow hopes that in the light of the formation of the regional Kurdish federal administration in Syria UN Secretary General’s special envoy for Syria will invite them to take part in the talks.

MOSCOW, March 18. /TASS/. Self-determination of Kurds is possible only in the framework of the new Syrian constitution, Russian presidential envoy for the Middle East and Africa and Deputy Foreign Minister Mikhail Bogdanov told TASS on Friday.

“The self-determination of Kurds should be outlined in the framework of new Syrian constitution, and it should be coordinated with other participants in the negotiations process,” Bogdanov said adding that “such issues should be resolved on the basis of consensus.”

Bogdanov noted that the decision to declare a federal region in Syria’s north was met negatively by participants in inter-Syrian talks in Geneva – both government and opposition. “This decision was beyond the framework of the negotiations process,” he noted. 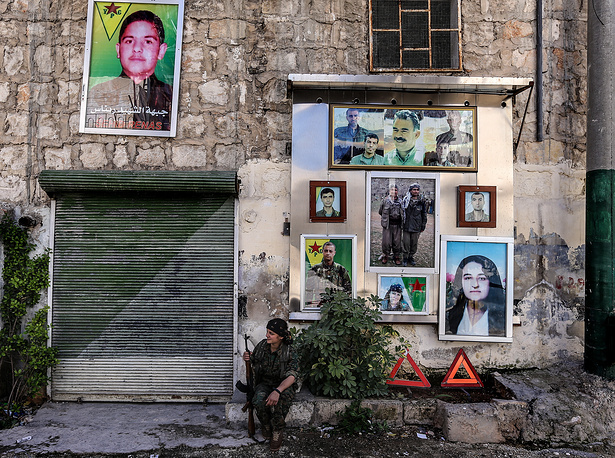 Kurdish soldier sitting beneath portraits at a memorial to fellow soldiers who have been killed in the Syrian Civil War, in the Sheikh Maksoud neighbourhood of Aleppo
©Valery Sharifulin/TASS

According to the diplomat, Moscow hopes that in the light of the formation of the regional federal administration in northern Syria by the Kurds UN Secretary General’s special envoy for Syria Staffan de Mistura will invite them to take part in the Geneva talks.

“We have said time and again that Kurds should be invited to the talks, Staffan de Mistura must do that,” he said.

“They need to discuss all these issues within the framework of the political process and develop a new Constitution, which could suggest a particular form of government. However, all this should be the product of an inclusive political dialogue with the participation of absolutely all groups of the Syrian society. All population groups should enjoy equal rights,” Bogdanov said.

Earlier reports said that more than 30 political parties that gathered for the congress in Rumeilan, a city in Syria’s Al-Hasakah province, proclaimed the creation of a regional federal administration in northern Syria on Thursday. The forum held under the motto “Democratic federal Syria – guarantee of co-residence and brotherhood of peoples” brought together 200 delegates. They represent the Kurds, the Arabs, the Assyrians, the Turkmens, the Circassians and the Armenians residing in northern and northeastern parts of Syria.
Turkish Kurds

The diplomat also pointed to the lack of reaction from international non-government organizations to Ankara’s ‘anti-terrorist operation’ in the Turkish southeastern provinces.

“We think that international human rights organizations, including Human Rights Watch and Amnesty International, which are claiming the role of experts in this sphere, should be tasked to attract attention of the world community to these developments,” she said, commenting on the investigation conducted by the Russia Today television channel into reports about mass violations of human rights in Turkey’s Kurdish regions.

“The lack of any comments from then on that problem may hint to a thought about their double-standard and discriminatory attitude they have been upholding in highlighting problems of human rights violation,” she stressed.